Hives medically referred to as urticaria, are red, itchy, raised areas of the skin that appear in various shapes and sizes. They can appear round, in rings, or as patches on the skin, and can afflict any part of the body. Hives tend to change rapidly and move around the body, disappearing in one area and reappearing in another, sometimes with a few hours. Swelling deeper in the skin that may accompany hives is known as angioedema. Swelling from angioedema usually affects the eyes, lips, genitals, hands, and feet, and generally goes away in less than 24 hours.

Ordinary hives flare up suddenly and for no apparent reason. Welts, itchiness and swelling develop, and usually go away within a few hours, only to reappear elsewhere on the body. This process will repeat for days or weeks. If the problem persists for more than 6 weeks, the hives are generally categorized as “chronic.” Chronic hives can last from months to years, and in about 80% of these cases, the cause cannot be determined.

Physical hives are those caused by direct stimulation of the skin, such as from cold, heat, sun exposure, pressure, sweating, or exercise. In this case, hives appear directly where the skin was stimulated, and nowhere else. This form of hives will diminish on its own, and should not reoccur. 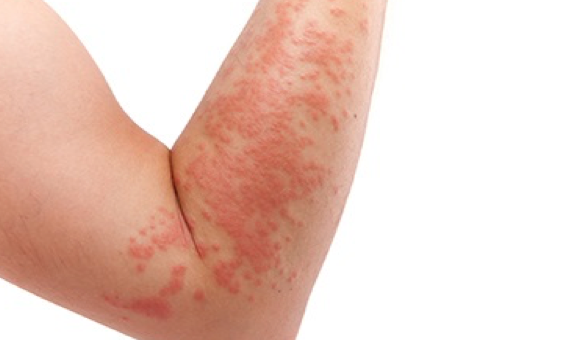 Causes:  Hives and angioedema form when, in response to histamine, blood plasma leaks out of small blood vessels in the skin. Histamine is a chemical released from cells along the skin’s blood vessels. As noted, the cause of many cases of ordinary hives is unknown. Histamine can be released by triggers such as viral infections, medications, food allergy, or insect stings.

Treatment:  Treatment is aimed at relieving symptoms while the hives subside on their own. Antihistamines are the most effective agents, as they oppose the effects of histamine leaked by mast cells. Antihistamines can be taken orally or topically, and are available over-the-counter. The main side effect of antihistamines is drowsiness.

Oral steroids are sometimes used to temporarily treat severe cases of hives, though they have limited effectiveness because most cases of severe hives last longer than steroids can safely be taken. That is, steroids can have many adverse side effects, and long-term use can advance such risks. Topical therapies for hives, including creams and lotions aim to numb nerve endings and reduce itching.

Topical therapies for hives, including creams and lotions aim to numb nerve endings and reduce itching.

Other forms of treatment do exist for treating hives, although they are generally not needed. For example, ultraviolet radiation, antifungal antibiotics, and agents that suppress the immune system can all be used, though the effectiveness is undetermined.